… in a beer can frame 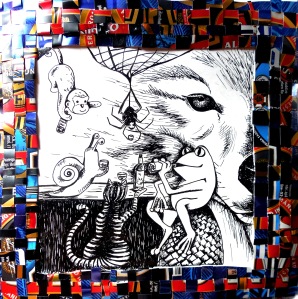 As they drink and chat, I want to tell you a bit about them.

The cat drinks wine, because he is a French royalty.

The snail is drinking … well, it really doesn’t matter… it’s all the same to him.

The frog is the fabulous person at the table, life of the party and even sits on a dragon’s egg. So fab! He’s drinking beer…

… just like the monkey. Another fab character… so fabulous, she doesn’t need to say it every Friday.

The spider… is just hanging in there… trying not to freak out anybody. But how could she… she’s so cute and helpful. ^-^

And then there’s the wolf… who isn’t drinking, because somebody has to drive. 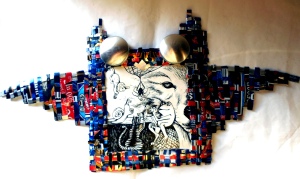 The owl keeps everything together and recycles all the broken parts. Tough job, but she’s a mighty being and so not alone. 🙂

I'm a visual artist, who works with rope, paper and recycled aluminium cans. Feel free to further explore my world. View all posts by Sabina Stan